Cameras are used in intelligent transportation systems because they allow acquiring wide range of information about vehicles and situation on the road. Video processing usually is computationally demanding and changing outdoor environment is challenging for computer vision. Here we propose a novel, efficient and adaptive algorithm using intervals on a virtual detection lines for vehicle detection, tracking and classification.

Intervals are processed and combined in world plane instead of frame -road and intervals are drawn as they would be seen by observer above the road. Such transform allows to infer interval affiliation to specific vehicles. After calibration of frame scene, transform allows to acquire vehicle parameters in real world units. Spatial parameters of vehicles, detected by algorithm, are used to classify vehicles in to truck and motorcars. 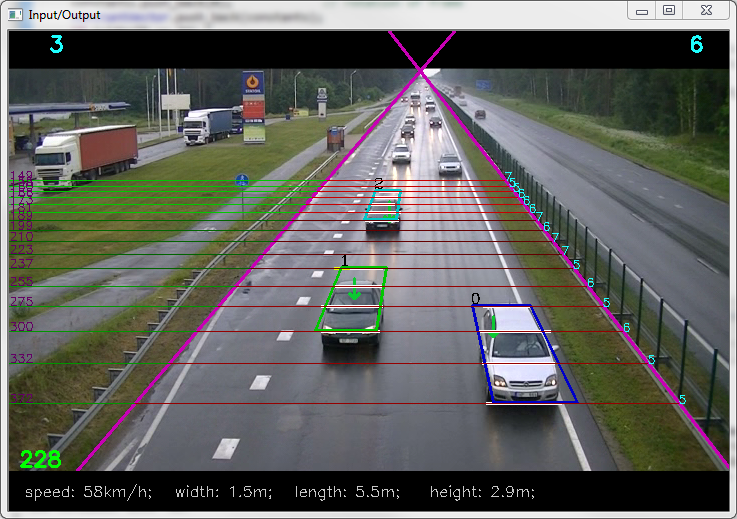 Use of adaptive backgrounds and thresholds allows to detect vehicles and events in different and changing lighting and weather conditions. Automatic detection of night changes detection to night mode. Shutter speed of camera is increased and only headlights of vehicles are detected. Using spatial and temporal information algorithm counts two headlights of same vehicles as single vehicle.

Simple detection and counting of vehicles can be accomplished with single detection line which is most limited but also most computationally efficient mode of operation of presented algorithm. Counting with single and multiple lines was tested on videos with different weather and lighting conditions. Test results for vehicle counting with single line showed 94%-99% accuracy for different videos. Best results are obtained by combining intervals from different detection lines in to vehicle objects 95%-100%. Same videos were used to test vehicle classification – approximately 88% of trucks were correctly detected. 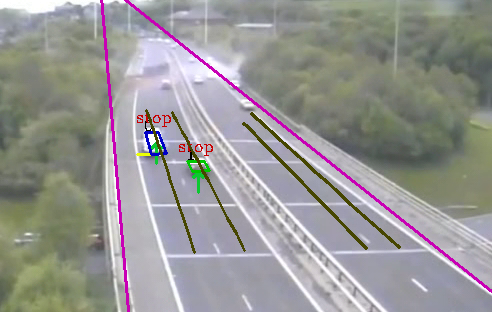 Virtual detection lines can be placed in sections of crossroads which should not be crossed under red light. Multiple lines allow to detect direction of vehicle movement. System may receive input information about current state of traffic light. If it is red and vehicle is crossing the stop line, system detects a violation. Red light runners can be detected also on crosswalks. Vehicles which are moving perpendicularly to detection lines are detected, meanwhile pedestrians move parallel. to virtual lines and are not considered as vehicle objects.